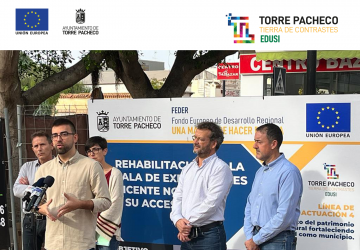 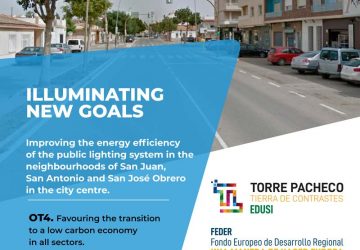 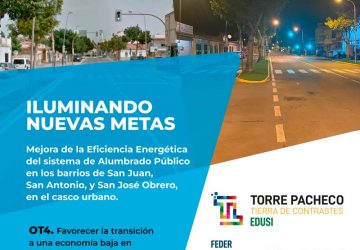 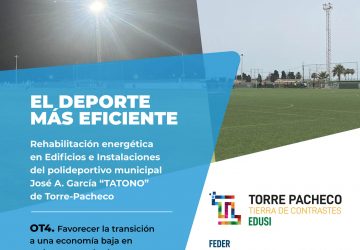 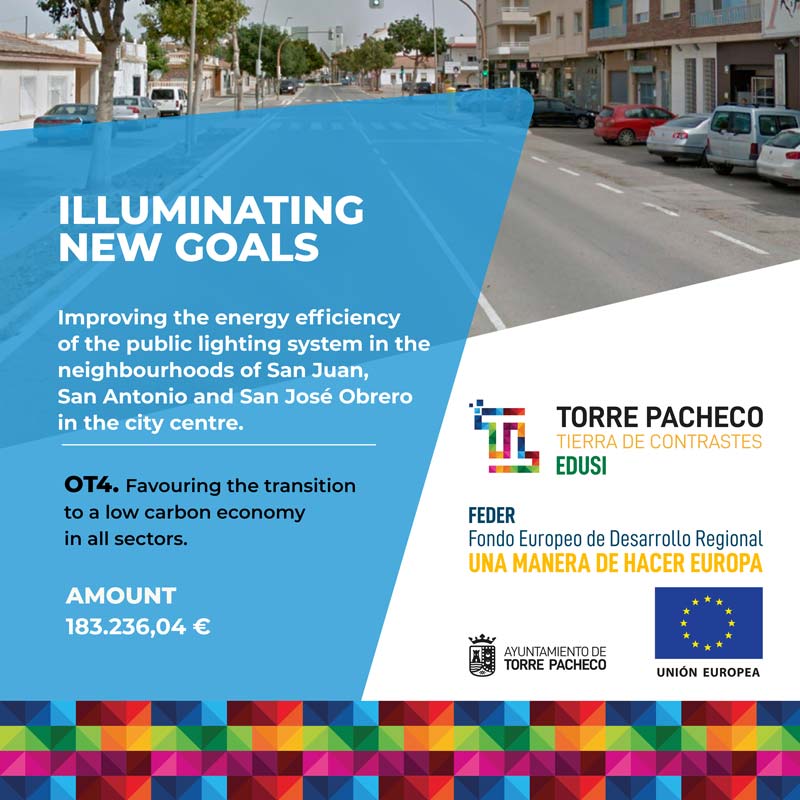 The Torre Pacheco Town Council has completed the project to improve the energy efficiency of the public lighting system in the San Juan, San Antonio and San José Obrero neighbourhoods, in the town centre, as part of line 3 of Torre Pacheco: Tierra de Contrastes «Energy efficiency and renewables in public buildings and infrastructures».

The residents of the neighbourhoods of San José Obrero, San Juan and San Antonio are already benefiting from energy efficiency improvements due to the installation of new outdoor public lighting. This new lighting means a significant reduction in C02 emissions, which has a positive impact on achieving a sustainable and efficient economy.

With the co-financing of European Regional Development Fund (ERDF) and within the DUSI Strategy Torre Pacheco: Tierra de Contrastes, the old street lighting luminaires have been replaced by other LED luminaires, much more beneficial for the environment and for our municipality.

The main objective of these works has been the reduction of electricity consumption and the adaptation of lighting levels according to current legislation.
In order to find out what the public thinks about these improvements, the Town Council has collected various opinions and feelings about the work to improve the energy efficiency of the public lighting system in the San Juan, San Antonio and San Juan Obrero neighbourhoods.

The general assessment of the residents of the San Juan, San Antonio and San José Obrero neighbourhoods of the new lighting system has been very positive.

According to the impressions and testimonies collected by the City Council, what the citizens have valued most is that the neighbourhoods are now more energy efficient, which has many advantages for both the municipality and the residents.

«These improvements mean significant energy savings. What more could you ask for? The residents also applauded the timing of the changeover to LED lights «because it is a great saving considering the current price of electricity».

The action to improve the lighting system has been carried out with the aim of favouring the transition to a low energy economy in all sectors is part of EDUSI Torre Pacheco, Land of Contrasts and has been co-financed by 80% of the ERDF Funds.

This operation, and all those included in the DUSI strategy, are co-financed by the European Regional Development Fund (ERDF), through Spain’s Multi-regional Operational Programme 2014-2020 with a grant of 2,385,925 euros, for a total investment of 2,982,406 euros. 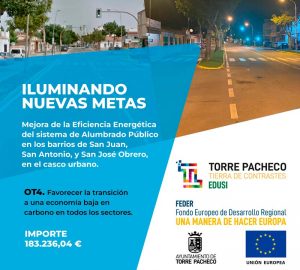 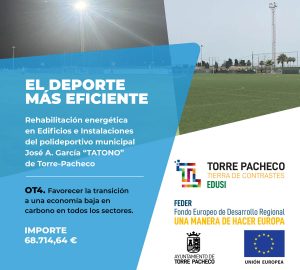